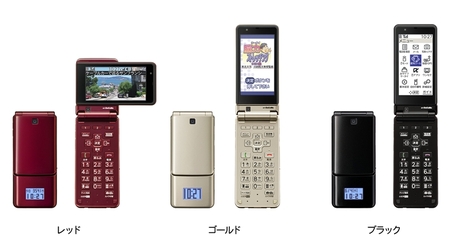 NTT DoCoMo, Japan will launch the FOMA “Raku-Raku Phone Premium (F884i)” mobile phone on April 14, 2008. The Raku-Raku Phone Premium features 1seg viewing and the “Osaifu-Keitai (contact less mobile IC card)” capabilities, while supporting both W-CDMA and GSM technologies so it can be used for international roaming service. Fujitsu’s “F905i” mobile phone, the Raku-Raku Phone Premier is added with a new proprietary technology to enter e-mail text using voice. The technology is an upgraded version of the Raku-Raku Phone IV’s capability that gives users instructions on changing trains and route navigation on a map in accordance with voice input. If the “voice input” button in the e-mail editing display is pressed, software that extracts the characteristics of spoken voices will start and access the i-mode site. When the user speaks what he or she wants to be written in the e-mail, the software detects the characteristics from their voice and transmits them to the server. At the server, voice recognition software manufactured by Advanced Media Inc outputs candidate text based on the transmitted amount of characteristics, then the Raku-Raku Phone receives and displays it in the e-mail text edition display.

Fujitsu’s “F905i” mobile phone, the Raku-Raku Phone Premier has adopted the “Yoko-Motion” function, a motion detector to launch applications by swinging the phone to right or left. As for the F905i, users can freely set applications to launch as the handset is swung when it is in the standby or e-mail edition mode. But the Raku-Raku Phone Premium is preset to launch the 1seg application when the phone is swung right and to start the camera when it is swung left. Fujitsu also made it easy to view the operation display even outside the buildings by employing a 550:1 contrast, half-transmissive LCD panel for the main display.