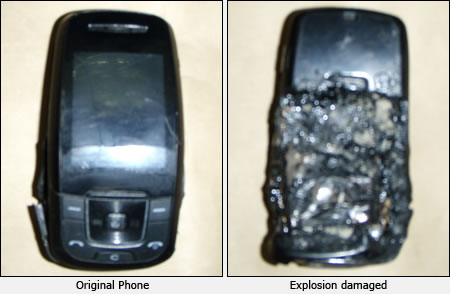 A 33-year-old excavator driver was found dead on Wednesday in Cheongwon, North Chungcheong Province (North Chungcheong Province resides in the center of Korean Peninsula, and is the only province which has no contact with the sea) after a suspected cell phone battery explosion, police said. The man, identified only with his surname Seo, was found lying dead beside his excavator in a stone quarry in Cheongwon at 8:40 a.m. by his colleagues. His cell phone was found in his shirt pocket with its battery severely melted and his chest burned and fractured, the police said. It is the first case of a suspected mobile phone battery explosion killing a person in Korea, though there has been several reports of such deaths in other countries. The cell phone was the product of a renowned South Korean electronics company, police officers said.
Update – The phone was manufactured by LG Electronics and not Samsung Mobile

However, police did not reveal the name of the manufacturer nor the type of the cell phone or battery. The manufacturer of the lithium-ion polymer battery was also not identified. Seo’s family and co-workers said he had no known chronic diseases. He was seen last by co-workers walking up to the quarry at around 7 a.m.