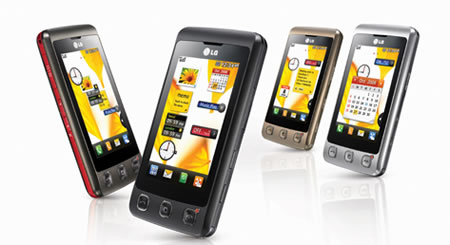 LG announced today that more than five million LG-KP500 Cookie mobile phones have been snapped up worldwide since its launch nine months ago. This gives Cookie the distinction of being the fastest selling device among LG’s range of full touch screen phones. To put this into perspective, 19,000 LG Cookies have been sold per day which equates to 791 units every hour or nine phones per minute. Five million LG Cookies placed side-by-side would cover an area of almost 29,500 square meters (35,281 square yards). Placed end-to-end, the line of Cookies would extend 535 kilometers (1,755,249 feet) which is over 60 times the height of Mt. Everest.

As a slim and lightweight handset, LG’s Cookie is fully equipped with most of the key features found in premium full touch screen phones, including a 3.0 megapixel camera, 3D accelerometer and an Active Flash User Interface with vivid widget icons to provide easy access to commonly used functions.