Fujitsu today announced that, using carbon nanotubes as heat-dissipation material in amplifier transistors, Fujitsu has become the first to achieve the successful operation of high-frequency, high-power (100W-class) flip-chip amplifiers employing carbon nanotubes, for mobile base stations designed for fourth-generation (4G, IMT-Advanced) systems. Fujitsu achieved high frequency, high output, and high amplification in the amplifiers by developing “dual-side heat-dissipation” technology, in which heat is dissipated through both sides of the transistor chip, which is the source of the amplifier’s heat output. 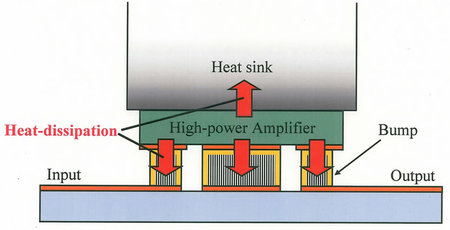 Fujitsu’s new technology enables the reduction of the transistor chip size to less than two-thirds (2/3) the size of existing transistor chips. Details of this new technology were presented at the IEEE International Symposium on Radio-Frequency Integration Technology 2009 (RFIT 2009) held from December 9 to 11 in Singapore, at which Fujitsu Laboratories was awarded the RFIT 2009 Best Paper for Oral Presentation award.