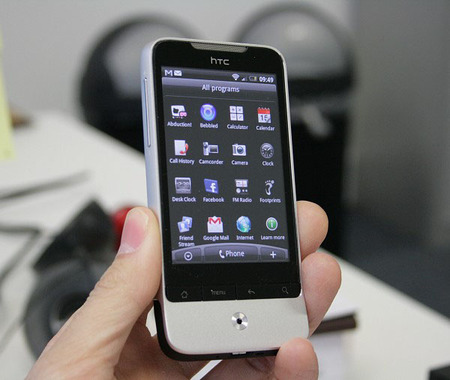 Just need a reason to change your mobile phone? A single phone never satisfies you? May be once you bring home the HTC Legend you might not want to change it for sometime. The newest cellphone from the house of HTC is any consumer’s dream machine. As far as design is concerned, it is great. And as for specification, it features everything a mobile lover would want.
Specification include 600 MHz processor, 3.2″ AMOLED capacitive touch screen with multi-touch, 320 X 480 HVGA resolution, Android 2.1 operating system, accelerometer, 5MP camera with flash, Wireless, Bluetooth, 3G, GPS and up to 32GB expandable memory card.

The only thing it misses is a front facing camera for video chatting. Especially in the age of 3G I feel its a must. But if you can neglect that point then I am sure you’ll love this phone.
Recombu has reviewed this phone and this is what they have to say:
“The HTC Legend is our favourite HTC device to date. Yes, the Nexus One and incoming HTC Desire boast faster processors and larger screens than the Legend, and some people will say it’s just a slightly better version of the Hero – but it’s more than that. This is a phone made with love and attention, it’s beautiful and it delivers a great user experience. We like it so much that we think it will be one of the phones of the year.”