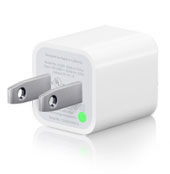 Apple has determined that the metal prongs in the new ultracompact Apple USB power adapter can, under certain conditions, break off and remain in a power outlet, creating a risk of electric shock. Apple has therefore decided voluntarily to exchange every ultracompact power adapter for a new redesigned adapter, free of charge. The adapters were supplied with every iPhone 3G (and may also have been purchased separately as an accessory) sold in the U.S., Japan, Canada, Mexico, and several Latin American countries. Users with ultracompact power adapters should immediately stop using them until they exchange them for a new, redesigned ultracompact adapter.