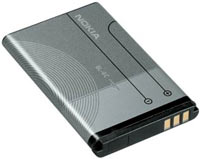 Nokia said earlier this week that approximately 46 million lithium ion batteries supplied by Matsushita Battery Industrial Co, a Matsushita subsidiary, for their phones could overheat, adding that they will replace them free of charge. Nokia made the announcement after receiving reports of about 100 incidents of overheating. It took 16 days for Nokia Japan to report to the ministry on the accidents from the day it first obtained information on overheating cases.