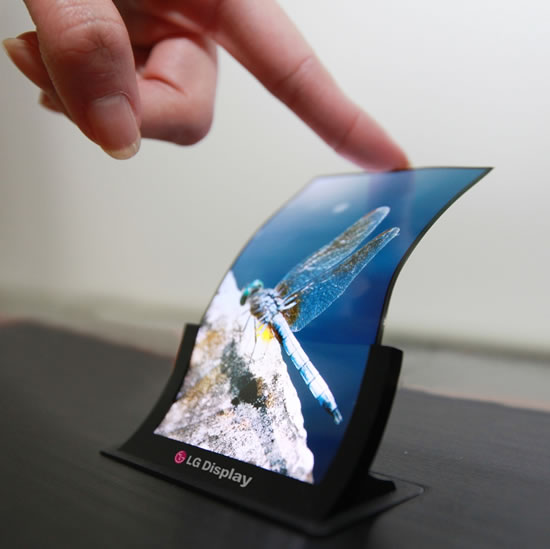 LG Display today announced that it will start mass-production of the world’s first flexible OLED panel for smartphones. This state-of-the-art panel represents another milestone following the company’s commercial rollout of the world’s first 55-inch OLED TV display earlier this year. LG Display’s flexible OLED panel is built on plastic substrates instead of glass. By applying film-type encapsulation technology and attaching the protection film to the back of the panel, LG Display made the panel bendable and unbreakable.

The new display is vertically concave from top to bottom with a radius of 700mm, opening up a world of design innovations in the smartphone market. And only 0.44mm thin, LG Display’s flexible OLED panel is the world’s slimmest among existing mobile device panels. What’s more, it is also the world’s lightest, weighing a mere 7.2g even with a 6-inch screen, the largest among current smartphone OLED displays. In March 2012 LG Display developed the world’s first 6-inch Electronic Paper Display (EPD) based on e-ink which utilizes a plastic backplane. According to research firm IHS Display Bank, the global flexible display industry will see dramatic growth and become a USD 1.5 billion market by 2016, exceeding USD 10 billion by 2019.