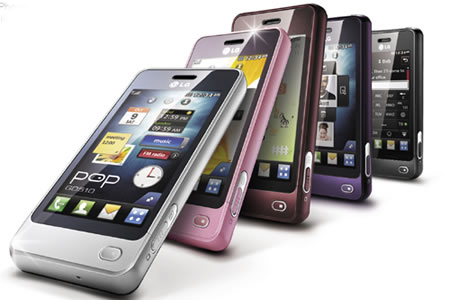 LG Pop (LG GD510) topped one million in worldwide sales just 100 days after its European and CIS launch in October 2009. With a 3-inch WQVGA touchscreen framed by a super-slim 4.8 mm bezel, the LG Pop has been a big hit with customers looking for a compact phone that has all the features they need built right in. With access to social network sites on its home screen, the LG Pop allows users to update their status on sites such as Facebook, MySpace and Twitter on the go at any time. The LG Pop has won plaudits for its innovative use of green technology.

With the optional solar battery cover, every 10 minutes the phone spends in the sun generates over two minutes of talk time or 180 minutes of standby time. Thanks to the phone’s Eco-tree and Eco-calculator applications, users can even calculate exactly how much CO2 has been cut by using the solar battery cover. Available around the world, this fast-selling full touchscreen feature phone has become one of LG’s most popular models.