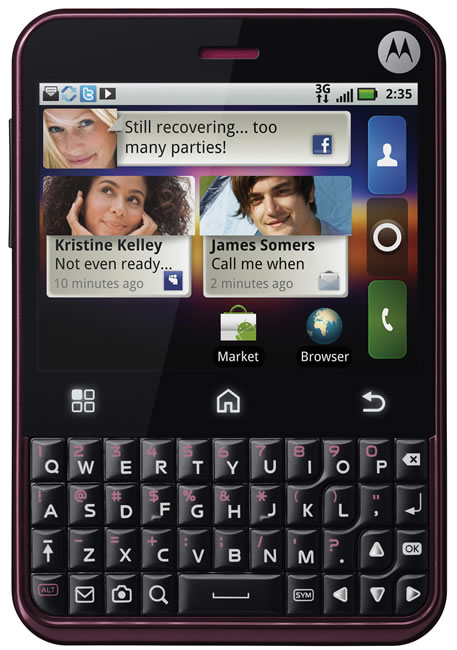 Motorola today announced the upcoming availability of Motorola CHARM, a touch screen smartphone that packs a social networking punch with Android 2.1, MOTOBLURTM enhancements, a compact design and a ACKTRACK feature that makes screen navigation even more intuitive. Motorola CHARM provides consumers all the features of a smartphone with the intuitive navigation of a 2.8 inch touch screen – all in a compact, pocketable design that makes messaging a snap using the combination of a full QWERTY keyboard and touch screen. The BACKTRACK navigation pad, located on the back of the smartphone directly behind the home screen, is similar to a laptop touch panel and enables an unobstructed view of the Web, texts, e-mails and news feeds. Plus, with Android 2.1 and enhanced MOTOBLUR features, CHARM offers new customization and filtering options.

Motorola CHARM will be the first device in the U.S. to feature an enhanced version of MOTOBLUR built on Android 2.1, which syncs contacts, posts, messages, photos and much more in easy to manage streams — from sources such as Facebook, MySpace, Twitter, Gmail, work and personal e-mail. Motorola CHARM is expected to be available this summer exclusively in the U.S. for customers of T-Mobile.