Murata has developed the world’s thinnest type waterproof piezoelectric speaker with improved sound quality and has started its mass-production (One million units per month). As the smartphone market expands, mobile phones are evolving from a device used simply for phone conversations into information processing terminals assuming connectivity to the Internet network. 35 out of 46 models of the 2011 autumn/winter mobile phones released in Japan have a waterproof feature. Waterproof support is on its way to becoming a standard feature for mobile phones including smartphones. Because of the above reason, Murata enabled waterproof support for the high sound quality piezoelectric speaker VSLBP2115E series by reviewing parts of its design, and have started mass-production of the new product as the waterproof piezoelectric speaker VSLBG2216E series. 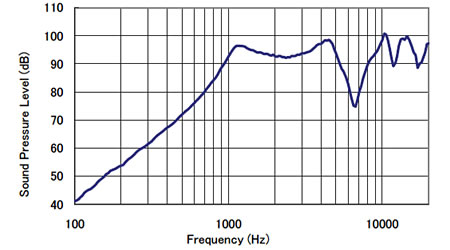 Murata’s waterproof speakers have no magnet. Therefore, it is free from troubles caused by absorbing iron sand and there is no electromagnetic noise that may affect magnetic sensors. Murata’s waterproof speakers provide a waterproof performance of the IPX7 grade without using a waterproof sheet like conventional speakers. In addition to eliminating the costs of the waterproof sheet and its installation, the VSLBG2216E series offers higher quality music playback because there is no more sheet to block the sound output hole. Murata speaker can be used in mobile phones, tablet computers, mobile Internet devices (MID), e-books, portable music players, digital still cameras, digital video cameras, IC recorders, and other mobile devices.