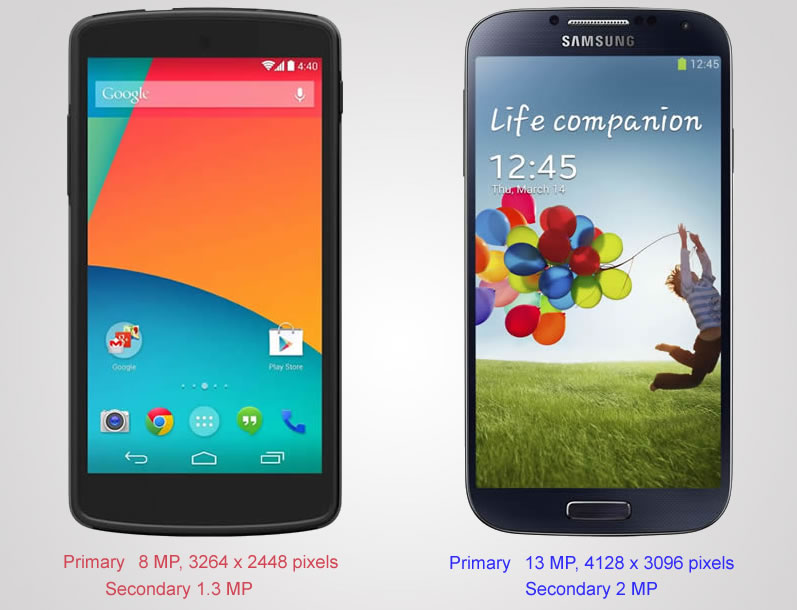 Battle of the heavyweights: Nexus 5 vs. Galaxy S4

A fierce battle in raging in the Android flagship smartphone market which was once a stronghold of Samsung, but all the top smartphone makers are now closely competing with the Korean giant threatening to snatch the top spot. Google Nexus 4 even by 2013’s standard isn’t outdated in anyways and minor niggles notwithstanding, it’s a great device. But the company along with LG upped the ante by launching its latest flagship, Nexus 5, which boasts some of the latest hardware specs. Let’s put the Nexus 5 against Samsung’s flagship, Galaxy S4, to see which one of the two heavyweights comes out swinging one better. Continue reading to find out…

Looks and Design
Samsung Galaxy S4 and Google Nexus 5 both have strikingly similar dimensions and also weigh the same at 130g, but they are worlds apart as far as the looks are concerned. The Nexus 4 had a major disadvantage with a glass backplate, but with the new Nexus 5, LG has replaced it with soft-touch plastic. The Nexus 5 might appear a little crude with its simple clean design but nevertheless, it looks great. On the other hand, the appearance of the Galaxy S4 has grown stale and the glossy plastic body has lost its sheen. Google Nexus 5 feels premium as compared to the S4 and even the ergonomics are slightly better. 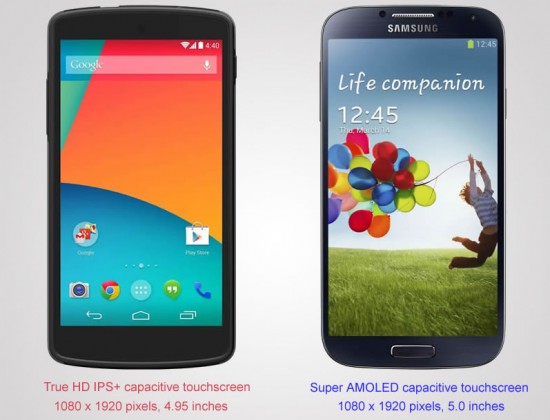 Display
Both the flagship smartphones come with a 5-inch display with a full HD resolution of 1080×1920 pixels. On paper, they sound incredibly similar but in actuality that’s not the case. Samsung’s own Super AMOLED capacitive touchscreen on the Galaxy S4 performs better than the True HD IPS+ capacitive of the Nexus 5. But Galaxy S4’s display tends to be oversaturated whereas the Nexus 5’s display renders truer colors. The IPS+ display is a tad yellowish as compared to the Super AMOLED but they both have similar outdoor visibility. The contrast of the Galaxy S4’s display is excellent which makes up for its poor brightness. 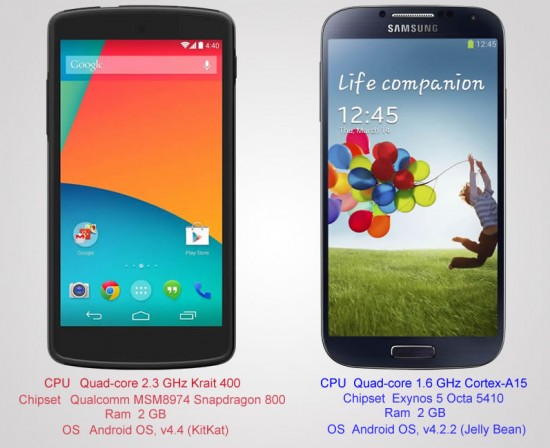 Hardware and Software
The biggest problem with the Nexus 4 was its battery and the lack of LTE, Google and LG have sorted out the problem by giving the new Nexus 5 LTE and slightly bigger 2300mAh battery. But the poor battery performance continues to haunt the otherwise excellent device and Galaxy S4 with its bigger 2600mAh battery performs better. Both have 2GB of RAM and as far as the internal memory goes, Nexus 5 comes in 16 and 32GB versions where as the S4 additionally has a 64GB variant and an option to increase it further with the help of MicroSD card. Samsung’s Galaxy S4 has a Snapdragon 600 processor which is inferior to the latest Snapdragon 800 processor on the Nexus 5 which is blazingly fast. Couple the amazing processor with the brand new out-of the-box vanilla Android 4.4 KitKat, and you get a seamless user experience. Samsung is rolling out Android 4.3 update for the Galaxy S4 currently but it does lag at times and doesn’t give the smoothest experience. But it’s a choice, do you want the vanilla experience of Android on the Nexus or a more feature laden Galaxy S4 with the TouchWiz UI on top of the OS. And then there’s the additional advantage of getting the Android updates first with the Nexus 5. 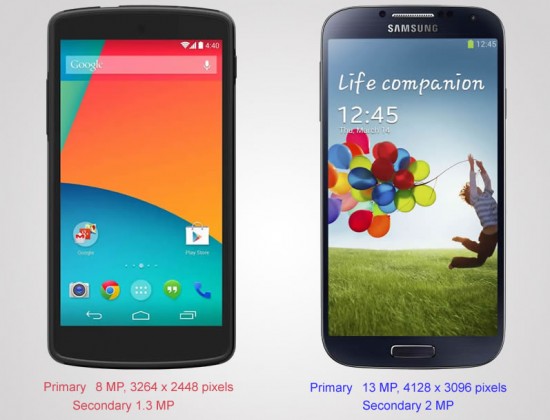 Camera
The camera on the Nexus 5 has drastically improved from the previous version, which was plain rubbish, thanks to the Optical Image Stabilization. But the 8MP camera still doesn’t match up to the performance of Galaxy S4 which has one of the best cameras on a smartphone. The quality of the 13MP camera on the Galaxy S4 is a lot better than the Nexus 5. 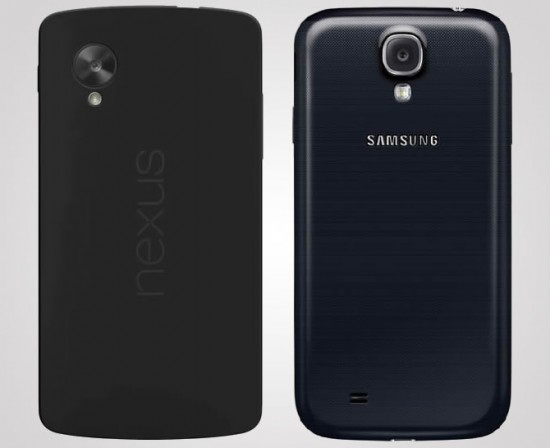 Pricing
We’ll try to compare the prices of the two devices off the contract to put in on level field. By a huge margin, the Nexus 5 is the most value-for-money device available in the market today and with its top of the line specifications, it’s hard to miss a deal like this, but there’s an issue of network compatibility in some countries, which is where Galaxy S4 edges ahead with its endless versions with different specifications.

Verdict
Samsung Galaxy S4 might have broken all previous sales records but even the Korean giants have sensed that it’s fast losing its appeal and desirability. Whereas the newly launched Nexus 5 has received rave reviews from most of the industry gurus. Both devices have their own set of advantages and disadvantages but just from the bang-for-the-buck point of view, Nexus 5 looks like a better bet and has tactical edge over Samsung’s flagship.