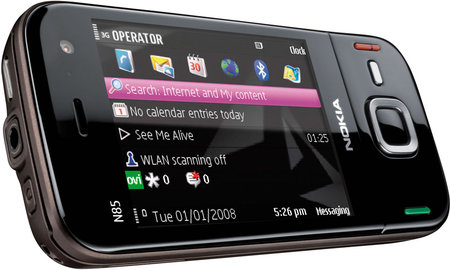 Nokia today unveiled the Nokia N85, the latest Nokia Nseries multimedia computer made to set new standards for mobile entertainment, gaming and sharing. Along with an eye-catching 2.6″ OLED screen and smooth, sleek finish, the Nokia N85 redefines the mobile experience. It boasts N-Gage gaming, music with in-built FM transmitter. The built-in 5 megapixel camera with Carl Zeiss optics and bright dual LED flash captures clear, sharp images as well as DVD-quality videos at 30 frames per second. Combined with A-GPS it is possible to geotag favorite pictures to see where each photo was taken using the Nokia Maps application or online sites such as Share on Ovi or Flickr. The Nokia N85 is pre-loaded with at least 10 made-for-mobile N-Gage gaming titles that jump off of the screen thanks to the dazzling OLED display and a voucher to activate one full game license. Dedicated gaming keys light up when the device is in landscape gaming mode to further enhance the action-packed experience.

Nokia N85 comes with an 8 GB microSD card. The 3.5 mm audio jack makes connecting a top-quality headset simple and an in-built FM transmitter lets the Nokia N85 play wirelessly through a car or home stereo to really crank up the sound. The Nokia N85 is expected to begin shipping in October 2008 with an estimated retail price of EUR 450, before taxes and subsidies.