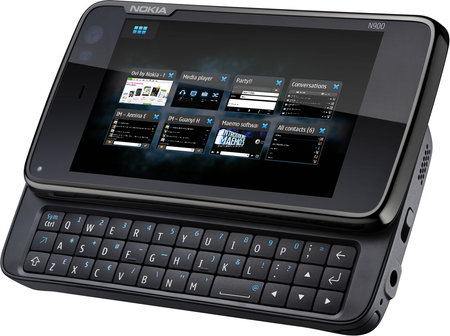 Nokia today marked the next phase in the evolution of Maemo software with the new Nokia N900. Running on the new Maemo 5 software, the Nokia N900 empowers users to have dozens of application windows open and running simultaneously while taking full advantage of the cellular features, touch screen and QWERTY keyboard. The Nokia N900 packs a powerful ARM Cortex-A8 processor, up to 1GB of application memory and OpenGL ES 2.0 graphics acceleration. The result is PC-like multitasking, allowing many applications to run simultaneously. Switching between applications is simple, as all running content is constantly available through the dashboard. The panoramic homescreen can be fully personalized with favorite shortcuts, widgets and applications. The Nokia N900 features a high-resolution WVGA touch screen and fast internet connectivity with 10/2 HSPA and WLAN. Online videos and interactive applications are vivid with full Adobe Flash(TM) 9.4 support.

Designed for computer-grade performance in a compact size, Maemo complements Nokia’s other software platforms, such as Symbian, which powers Nokia’s smartphones. The Nokia N900 has 32GB of storage, which is expandable up to 48GB via a microSD card. For photography, the Maemo software and the N900 come with a new tag cloud user interface that will help users get the most out of the 5MP camera and Carl Zeiss optics. The Nokia N900 will be available in select markets from October 2009 with an estimated retail price of EUR 500 ($717) excluding sales taxes and subsidies.
Sponsored by – Dialaphone which helps you find great mobile phone deals.