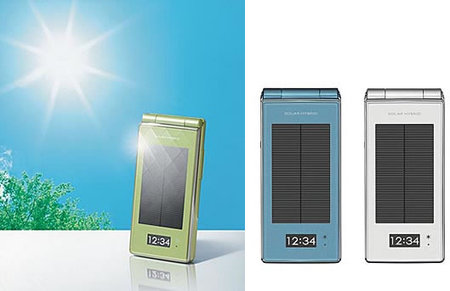 NTT DoCoMo announced today its development of the SOLAR HYBRID (docomo STYLE series SH-08A), a solar-powered, waterproof mobile phone. The DoCoMo SOLAR HYBRID can be recharged with sunlight as well as electricity. Even if the battery has completely lost its charge, just 10 minutes of solar recharging via a panel on the phone’s body provides approximately one minute of talk time. The handset comes with an 8-megapixel CCD camera that takes excellent photographs even dim lighting or when objects are moving.

The DoCoMo SOLAR HYBRID’s waterproof body, resistant to water sprays from all directions and submergible to depths up to one meter enables safe, carefree enjoyment of mobile communication and entertainment in the bath, kitchen, beach, rain or other environments where water is present. The DoCoMo SOLAR HYBRID will go on sale at all DoCoMo sales channels in Japan from September.