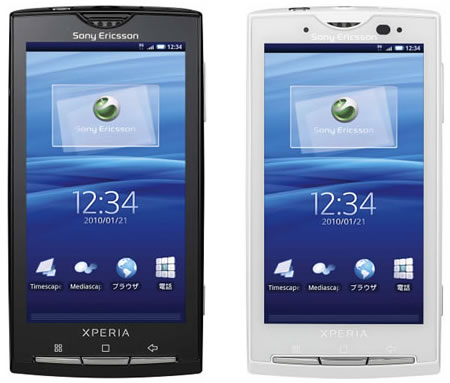 NTT DoCoMo today unveiled its docomo Smartphone Xperia known as the Xperia X10 in markets outside Japan. Manufactured by Sony Ericsson Smartphone Xperia is scheduled to go on sale in Japan this April. Built on the open Android operating system and powered by a fast 1GHz CPU, the docomo Smartphone Xperia with 4.0-inch touchscreen is a brand-new entertainment machine for enjoying intelligent mobile communication, web browsing, music and other media (see attachment). The docomo Smartphone Xperia features Mediascape, a Sony Ericsson signature application for intuitive organization of music, photos and videos. If the infinite button is pressed while playing a song, Mediascape searches for all content related to the artist across a broad range of media, both in-phone and online, such as music, videos and information. The docomo Smartphone Xperia intelligently recognizes up to five faces from photos stored in the phonebook and automatically tags faces in photos taken with the handset’s 8.1-megapixel camera. The user can make phone calls or send emails to an individual by simply touching their tag in a photo.

The docomo Smartphone Xperia is compatible with FOMA HIGH-SPEED, DOCOMO’s HSUPA/HSDPA data-communication service for extra-fast 2.0 Mbps uplinks and 7.2 Mbps downlinks (theoretical maximums). It also is equipped for Wi-Fi, uploading videos and photos to YouTube and Picasa, and downloading applications from Android Market, allowing users to co-create an experience that is entirely unique to them. Google services such as Google search, Google Maps and Gmail are preloaded.