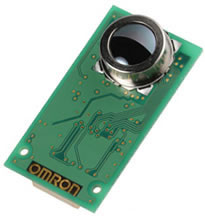 Omron today announced that they have finished development work on the world’s first infrared sensor manufactured with wafer-level vacuum packaging technology to create a 16×16 element MEMS non-contact infrared thermal sensor capable of highly precise 90-degree area detection. In recent years the demand for human presence sensors has been growing in tandem with the demand for energy-efficient smart home and smart office environments in which lighting, heating, etc. is automatically controlled according to where people are.

Since conventional pyroelectric human presence sensors (motion sensors) are only able to detect people when they are in motion, they are not as suitable for detecting the number of people in a certain space or their relative positions as Omron’s new thermal sensor. Omron will now also work on commercializing stand-alone human presence sensor modules by combining non-contact thermal sensors with algorithms that can accurately distinguish the number of people and their positions within a detected space. Shipping of test samples will commence in October 2013.
Features:-
The ability to detect motionless people thanks to the use of thermopile-based sensors, unlike pyroelectric sensors that can only detect people when they are moving.
Improved accuracy of detection of people’s positions within the target space with thermal sensing possible over a two-dimensional 256 pixel (16×16 element) area.
Wide 90-degree field of view means that one sensor can be used to cover a space that would require four 45-degree sensors to cover.
High-speed 4fps detection (4 frames per second) makes it possible to detect people moving at 1m/s.