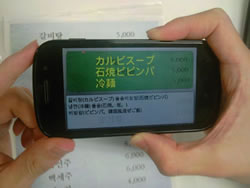 Omron Software has developed a smartphone application that translates short English, Korean and Chinese written phrases into Japanese in less than a second. Omron aims to have the software, useful for translating billboards, road signs and menus, preinstalled on new smartphones and tablet computers this year itself. Omron may add applications to translate from Japanese to English or languages other than the three languages to Japanese in future. The application is very fast as the user doesn’t have to take a photo for translation. The user simply aims the phone’s camera and the application uses the live image of the text. The Japanese words are displayed on the phone’s screen on top of the corresponding words in English, Korean or Chinese. On latest Japanese smartphone models, the Japanese translation appear with in half a second.

There are already several applications on the market that recognize and translate photographed text. Such software can be troublesome to use, however, because users have to take the photos, which can then fill up the phone’s storage space. Omron hopes its new application will be useful for Japanese tourists who go overseas and want to be able to read menus items and other short phrases. Translating longer text using the application however takes a long time.