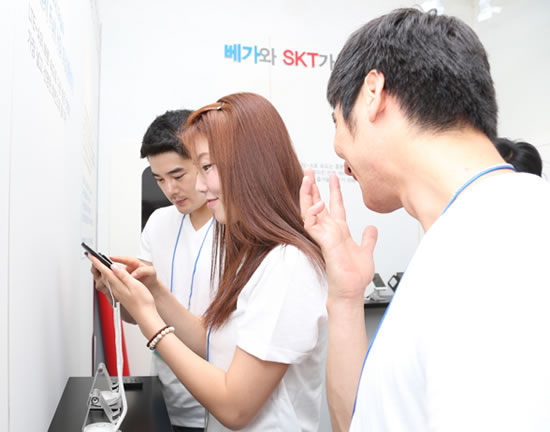 Pantech today revealed Vega LTE-A,smartphone with the fingerprint recognition function in Korea. So far Samsung Galaxy S4 and LG G2 launched today are the only smartphones that supports LTE-A. The Pantech Vega LTE-A is mounted with a Secret Key that supports fingerprint recognition and rear-touch features, first in the world. Pantech developed the Secret Key is developed in response to consumer worries about unintended personal information leak. The design of new smartphone satisfies the needs of consumers who want to use a large-screen phone with a single hand.

The Vega LTE-A is mounted with a 5.6-inch natural IPS pro Full HD display, the largest among the smartphones that support LTE-A and a 3,100mAh battery. With a Qualcomm SnapDragon 800 series (MSM8974), the Vega LTE-A has two times faster speed than those of existing LTE phones. Vega LTE-A can download a 17-MB video, five 3-MB music file, eight 2-MB e-books, and 17 1-MB photos within a second at a 150-Mbps speed.