NTT DoCoMo reached the milestone of selling 20 million Raku-Raku PHONE series handsets in Japan on July 18. The Raku-Raku PHONE series (raku means easy to use) is a lineup of mobile phones designed to be highly user-friendly and suitable for everyone. The series was first introduced in October 1999, with the P601es Raku-Raku PHONE I. DOCOMO has since released a total of 18 models and has seen rapid sales growth in Japan, resulting in the milestone achievement of 20 million units sold as of this month. While the fundamental features of the Raku-Raku PHONE series have remained the same over the years—three one-touch command buttons; large, easy-to-read characters on displays; and large, easy-to-operate buttons—DoCoMo has added additional features to meet customer needs, such as Deco-mail, which allows users to decorate mails with pictograms and pictures, and dust and water- proof designs. 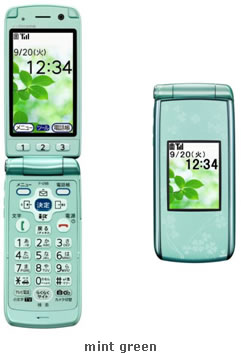 The latest model, the Raku-Raku PHONE Basic 3, adds a special button that, with a single push, connects users to a dedicated telephone support center. With such improvements, DoCoMo hopes to further increase the user-friendliness and functionality of this popular phone series. To commemorate this milestone, DOCOMO will add a new color to the Raku-Raku PHONE 7 model series, mint green. It will be available in docomo shops in late August.