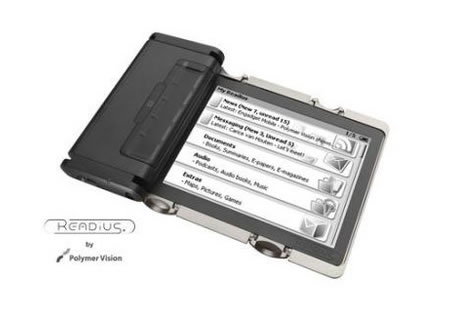 Readius world’s first mobile phone that folds out when you want to read news, blogs or email!

Polymer Vision a Dutch company has squeezed a display the size of two business cards into a gadget no bigger than other mobile phones — by making a screen that fold up when not in use. The 13-cm display of Polymer Vision’s “Readius” mobile phone is the world’s first that folds out when the user wants to read news, blogs or email and folds back together so that the device can fit into a pocket. Like Amazon’s Kindle, the Readius has a so-called electronic paper screen, which displays black-and-white text and images that look almost like they have been printed on paper. The mobile phone Readius connects to the Internet using the third-generation mobile phone networks with high data speeds.

The mobile phone Readius from Polymer Vision is in production and will go head-to-head with Apple’s iPhone and Amazon’s ebook reader Kindle when it hits stores mid-2008. You get the large display of e-reading, the super battery life of e-reading, and the high-end connectivity … and the form factor and weight of a mobile phone,” said Karl McGoldrick, chief executive of the venture capital-funded firm, in which Philips still has a 25 percent stake.