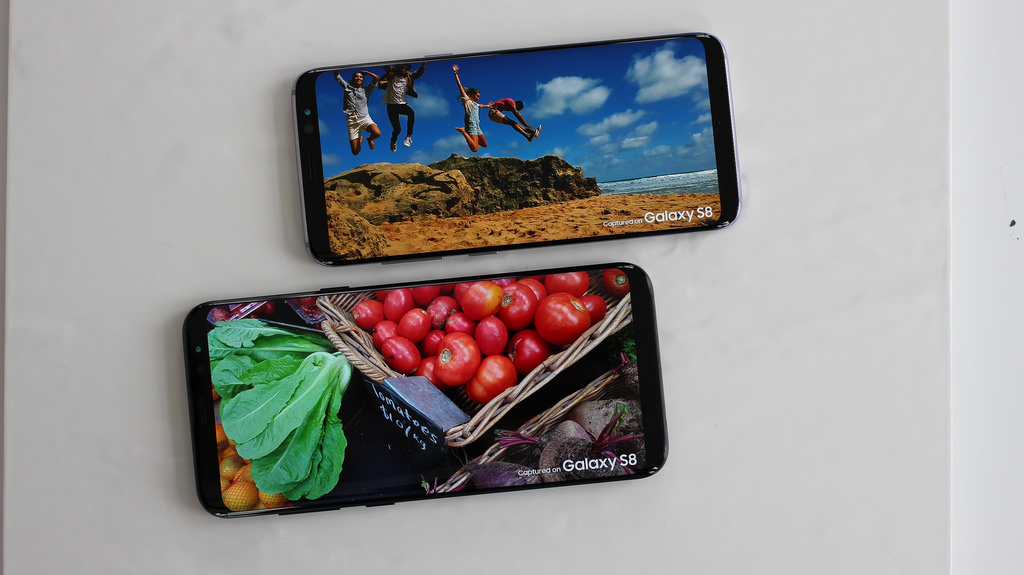 Display
The biggest difference between the two is the display. You no longer have to choose between models with or without the curved Infinity display as you did in the days of the S7 and S7 Edge: Both S8 models have it. You also won’t find a difference in aspect ratio (both have a widescreen ratio of 18.5 to 9) or resolution (1,440 by 2,960 in both models) between the S8 and S8 Plus.

The headline here is size; the S8 has a 5.8-inch display — larger than both the S7 and S7 Edge — and the S8 Plus comes in at 6.2 inches, slightly smaller than the Galaxy Note 8. Those larger displays affect other details that may help guide your decision. Due to the difference in size, the pixel density is slightly higher on the S8, although it’s probably not noticeable enough to matter.

Hardware
The S8 and S8 Plus both feature 4 GB of RAM and the same chipsets, although the latter is different depending on where you live. (Forbes reports that a 6GB version of Galaxy S8 models may be coming to Asian markets, but no plans call for offering it in the United States.)

American customers get the Qualcomm octa-core Snapdragon 835 (4x 2.35GHz and 4x 1.9GHz Kryo CPUs) and Adreno 540 GPU, while buyers outside the United States have the Exynos 8895 (4x 2.3 GHz and 4x 1.7 GHz CPUs) and ARM Mali-G71 MP20 GPU. The Galaxy S8 and S8 Plus also both feature 64GB of internal storage as well as a MicroSD card slot for those who need more space. An eight-megapixel camera represents an improvement over the S7 models.

Battery
The battery in the Samsung Galaxy S8 is 3,000mAh, the same as it was in the S7. The Galaxy S8 Plus takes advantage of the extra space provided by its larger size, and it comes with a 3,500mAh battery. That battery is slightly smaller than the 3,600mAh battery in the S7 Edge, but a more efficient chipset should make up for potential issues with drain from the larger display.

TechRadar reports that the S8 and S8 Plus should both be able to make it through 1 1/2 days of normal use before needing a recharge, although you may need to turn on some battery-saving options to get there. Both models also support fast wireless charging, as well as wired charging via a USB Type-C port.

Price
Samsung’s Galaxy S8 smartphones don’t come cheap. The S8 costs $720, and for the S8 Plus, you’ll spend $825. Remember to also factor in the cost of a monthly plan. The handset prices are comparable to what you would have paid for an iPhone 7 and 7 Plus, respectively, before Apple released the iPhone 8. While either one is a significant expense, you’re getting a lot of cutting-edge technology for your money. You can also take some of the sting out of the price tag by selecting a payment plan for your Galaxy S8 Plus through a carrier such as T-Mobile. With the nation’s largest 4G LTE network, T-Mobile offers wireless customers network coverage from coast to coast.

In addition to comparing specs, you may want to get your hands on both the S8 and S8 Plus before making a decision. Whichever you choose, you’ll get the best smartphone technology Samsung has to offer as well as its most beautiful display yet.