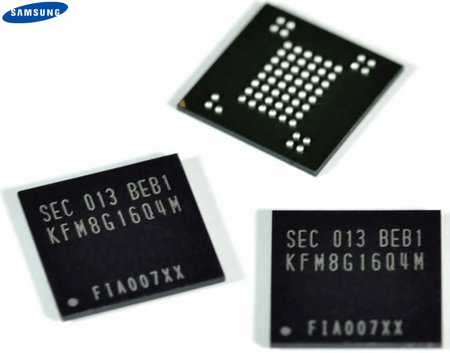 Samsung today announced availability of an eight gigabit (Gb) OneNAND chip that takes advantage of advanced 30 nanometer (nm) class process technology. The 8Gb OneNAND features the reliability of a SLC design and the proven performance of OneNAND, which reads data at 70 megabytes per second (MB/s), more than four times the speed of conventional NAND (17MB/s). These characteristics and a low-voltage design make it a particularly attractive solution for handling the growing amount of code data used with touch screens and other high resolution smartphone features.In addition, by applying advanced 30nm-class process technology, Samsung is able to raise productivity by 40 percent over its previous 40nm-class design.

Samsung OneNAND memory can be used as buffer memory not only for ‘writes’ in the system – thanks to its faster-than-NAND ‘write’ speeds, but also as a buffer for faster, high-performing ‘read’ operations thank to its NOR flash interface. The high-density Samsung OneNAND memory is now sampling with volume production scheduled by the end of this month.