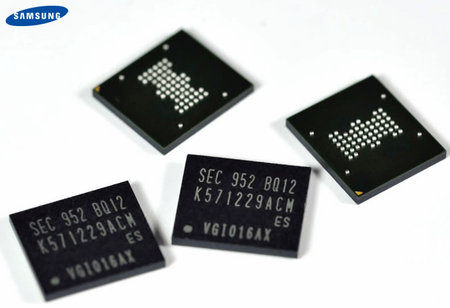 Samsung today announced the industry’s first multi-chip package (MCP) with PRAM – for use in mobile handsets, beginning later this quarter. The 512 megabit Samsung PRAM in the MCP is backward compatible with 40 nanometer-class NOR flash memory in both its hardware and software functionality, allowing mobile handset designers the convenience of having multi-chip packaging fully compatible with past stand-alone PRAM chip technology. PRAM, which stores data via the phase change characteristics of its base material, an alloy of germanium, antimony and titanium, provides three-times faster data storage performance per word than NOR chips.This new PRAM-packaged memory combines the nonvolatile nature of flash memory with the high-speed capability of DRAM.

As a replacement for NOR, PRAM can more easily accommodate the growing demand for high-speed, high-density nonvolatile memory in mobile phones and other mobile applications such as MP3 players, personal multimedia players and navigational devices. PRAM is expected to be widely embraced by next year as the successor to NOR flash in consumer electronics designs to become a major memory technology.