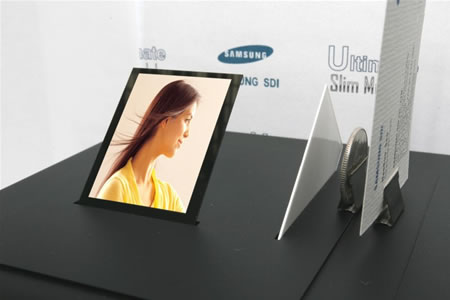 Samsung SDI Co., Ltd. Korea has developed the world’s slimmest LCD panel measuring only 0.74 mm in thickness. In the recent trend for slimmer mobile phones, manufactures are increasingly reducing the thickness of compact LCD panels. The latest panel is a 2.3-inch model with a resolution of 320 x 240. It features a luminance of 300 cd/m2 and a gamut of 70% NTSC. Samsung has adopted frame technologies called “high-strength brick type bezel” and “multilayer hemming bezel.” to avoid degradation in strength and durability due to the reduced thickness. Samsung was issued 10 patents for its frame technologies in and outside Korea.