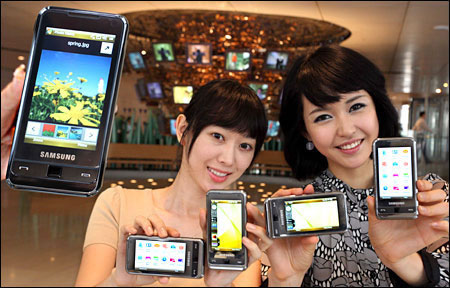 Samsung launches Omnia phone ahead of the iPhone release

Samsung today revealed its SGH-i900 mobile, dubbed “Omnia” ― meaning “everything’’ in Latin. The phone has a 3.2-inch screen with enhanced wireless internet capabilities such as HSDPA at 7.2Mbps and Wi-Fi, as well as a 5-megapixel camera, accelerometer functions and even an extended memory option of up to 16 gigabytes. Samsung SGH-i900 runs on Windows Mobile 6.1 operating system. The handsets haptic feedback makes the phone vibrate when users touch its screen. Samsung Omnia phone comes ahead of the iPhone release, which is slated for early today.

The quick launch of the Omnia has been in line with the iPhone release. The Samsung Omnia phone is also suited to North American consumers with its quad-band GSM and tri-band HSDPA support, which allow it a full access to networks from AT&T. Samsung expects that the Omnia smart mobile will grab much attention from business people since it can become an entertainment device during long-haul flights and lengthy meetings.