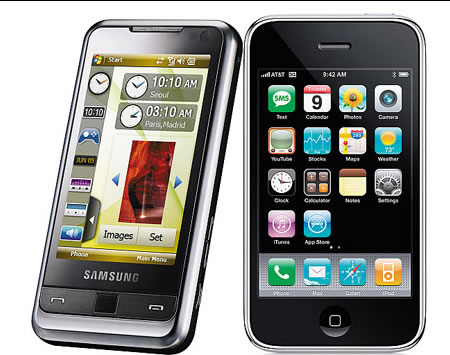 A day before the iPhone 3G’s release, Samsung unveiled the Omnia (SPH-i900). The smartphone, set to take on the iPhone, boasts a slew of functions and features including a 3.2-inch full touch-screen, 5-megapixel camera, GPS, 32GB memory, Bluetooth 2.0 and Wi-Fi wireless networking. The Samsung Omnia, smaller than the iPhone, fits neatly in the palm. Its high-resolution camera, memory and communications specs also outdo the iPhone, not to mention the Omnia’s haptic feedback technology. The Omnia uses Microsoft’s Windows Mobile 6.1 operating system, enabling a variety of applications such as e-mail, Word, Excel and PowerPoint.

While the iPhone has opened up the touch-screen phone market through creativity, Samsung is approaching it with its characteristic perfection. Mean while iPhone 3G went on sale in 22 countries and territories including the U.S., Australia, Canada, Denmark, Germany, Hong Kong and Japan on Wednesday. Very soon the verdict will be out–who is smarter- Apple iPhone 3G or Samsung Omnia?