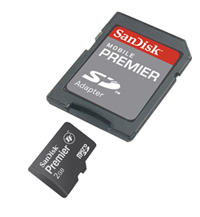 SanDisk Mobile Premier microSD cards will be offered in 1- and 2-gigabyte (GB) 1 capacities, with suggested retail prices of $44.99 and $69.99, respectively. The fingernail-size cards, which come with an adapter to fit standard SD card slots, are slated to be available this spring at many of the more than 200,000 stores worldwide where SanDisk products are sold.