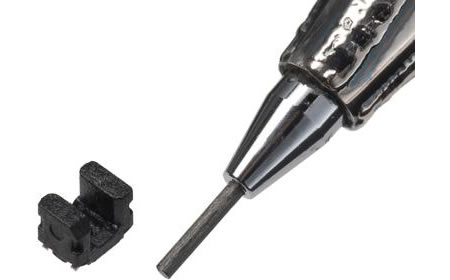 Sharp has unveiled the GP1S296HCPSF photo interrupter for use in the lens unit of camera-equipped mobile phones. A photo interrupter is a photo sensor composed of light-emitting and light-receiving devices. It detects the existence/nonexistence of the target object or the movement of the object with a light beam emitted from the light-emitting device. The company has reportedly revised its proprietary double mold structure and reduced the thickness of the resin molded portion. The detection width of the lens movable part is reduced from the existing 0.3 to 0.2 mm while maintaining the distance between the light-emitting and light-receiving devices, thereby allowing higher resolution detection.

Sharp GP1S296HCPSF measures 2.5 x 1.8 x 1.9 mm, which the company claims is the industries smallest, and has a volume approximately half the existing product. The sample price is 30 yen. Volume production is slated to start on September 28, 2007. The company expects the monthly production of 1.5 million units.