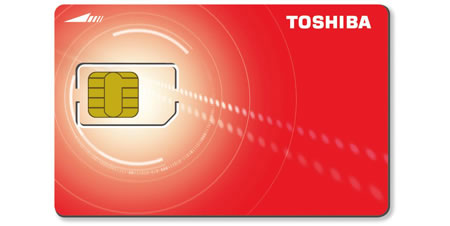 Toshiba announces USIM card for use in mobile phones

Toshiba today announced the development of a new USIM card for use in mobile phones supporting the NFC (Near Field Communication) function, in anticipation of the worldwide rollout of mobile contactless services forecast for 2010 and 2011. Toshiba’s newly developed USIM card meets the latest specifications of the European Telecommunications Standards Institute-Smart Card Platform (ETSI SCP) and the GSM Association (GSMA). It is also compatible with the GSMA’s Pay-Buy-Mobile programme, and offers full support for mobile contactless services, and meets all the security levels required for international payment applications.

Toshiba plans to release samples of the new card in the third quarter of 2009, and will exhibit the card and provide full details at the GSMA Mobile World Congress 2009, to be held in Barcelona, Spain, from February 16 through 19.With the introduction of the USIM card to the mobile market, Toshiba looks to support mobile phone users with enhanced convenience and full security, and to facilitate the successful development of NFC worldwide.
This was a guest post by Patrick who usually blogs about mobile phones at DAP. Grab the RSS feed for his daily updates.