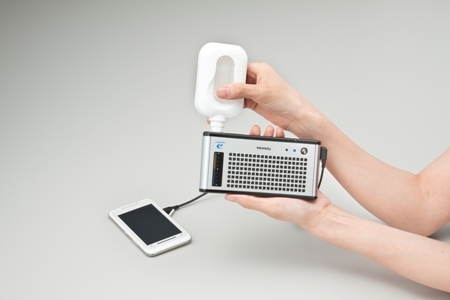 Toshiba today announced the launch of its first direct methanol fuel-cell product: Dynario, an external power source that delivers power to mobile digital consumer products. The palm-sized Dynario is Toshiba’s first DMFC product. Once fueled with an injection of methanol solution from its dedicated cartridge, Dynario starts to generate electricity that is delivered to a digital consumer product—a mobile phone or a digital media player—via a USB cable. On a single refill of methanol which can be made in an instant period (around 20 seconds), Dynario can generate enough power to charge two typical mobile phones. 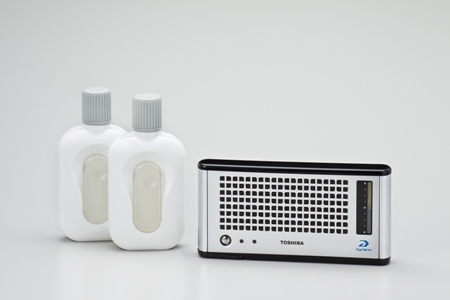 Dynario integrates Toshiba’s state-of-the-art fuel cell technology, allowing it to operate with only a small volume of concentrated methanol solution, reducing the size and weight of the fuel tank and the overall product. An ingenious fuel feed structure realizes uniform methanol delivery, and stable output to any attached device is fine-tuned by a built-in microcomputer. Performance is also optimized by Dynario’s hybrid structure, which uses a lithium-ion battery charged by the fuel cell to store electricity. The dedicated fuel cartridge is co-developed with Toyo Seikan Kaisha, Ltd., one of Japan’s leading packaging container companies. 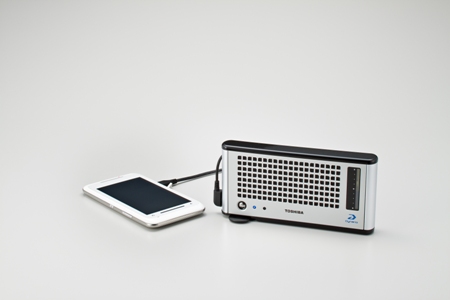 Dynario and its fuel cartridge fully comply with the International Electrotechnical Commission’s safety standards (provisional edition). Dynario, together with a dedicated fuel cartridge for refueling on the go, will be launched in Japan, in a limited edition of 3,000 units only, and will be exclusively available at Toshiba’s direct-order web site for digital consumer products in the Japanese market. Orders will be accepted from October 22, and shipping will start on October 29.