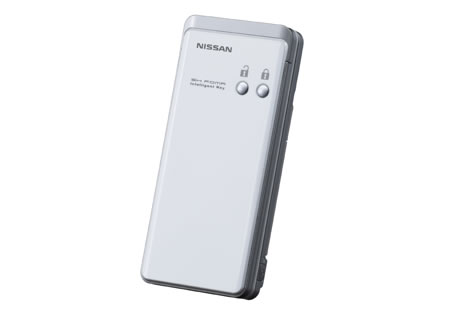 Nissan, NTT DoCoMo and Sharp have jointly developed a mobile phone capable of functioning as an intelligent key for automobiles – a world’s first. The device will incorporate Nissan’s Intelligent Key system, already a standard feature in various Nissan vehicles. Nissan’s Intelligent Key system, installed in more than 950,000 units of various Nissan models since 2002, employs two-way wireless communications technology to automatically unlock/lock the car door and start/stop the engine. Nissan and Sharp has now integrated these electronic intelligent-key, wireless communications and electromagnetic technologies into the new handset.

The convergence of automotive and cellular technologies was made possible by DoCoMo’s expertise in the marketability of mobile phones, Sharp’s development of the phone itself and Nissan’s provision of technical support to ensure the key’s operability with its vehicles. Nissan, DoCoMo, and Sharp will demonstrate this mobile phone with built-in Intelligent Key in their respective exhibits at CEATEC Japan 2008, which begins September 30. The three firms will continue to develop the product with an aim for commercial distribution in early fiscal year 2009.