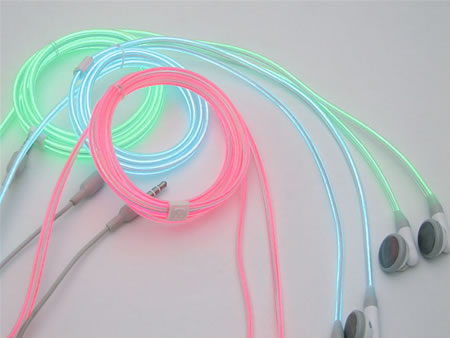 Evergreen Corporation has launched DN-ELER01 earphones with organic EL light/write cable to add color to your music. Available in three colors-blue, pink and lime the organic EL light cables blinks as music is played. You can adjust the tempo of blinking with the dial on the power source box. The light/write/blinking of the cable is powered by 2xAAA batteries. The cable length from the power source to the head phone terminal is 10cm and approximately 95cm of ear phone cable.

The Evergreen DN-ELER01 blinking DN-ELER01 earphones are compatible with iPod and MP3 players. The organic EL light/write blinking earphone weighs 50g and is available for approximately 4,980 Yen ($43).
Via – Evergreen (Japanese)