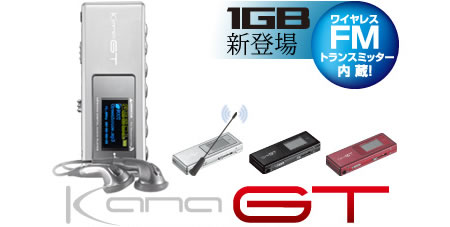 Green House Corporation Japan has launched a sleek 1GB digital audio player KanaGT with built in FM transmitter. The digital audio player plays MP3/WMA files. You get bored listening to the same music again and again and wish for some different type of music. With the built in FM transmitter listen to your local FM stations via your car stereo. You can use the Green House KanaGT USB2.0 player with a PC as a mass storage device and transfer your favorite music albums easily from the PC. With superior clarity thanks to the Organic EL display it becomes easy to use during night. The player can be used as a voice recorder .You can listen to music via ear phones which act as antenna also.

Green House 1GB KanaGT with built in lithium ion battery measures approximately 83.0×12.0x29.0 mm, weighs 36g and will be available from June 6th in Japan in three color variations. Once fully charged the battery lasts for approximately 7 hours and 4 hours when used as FM transmitter.