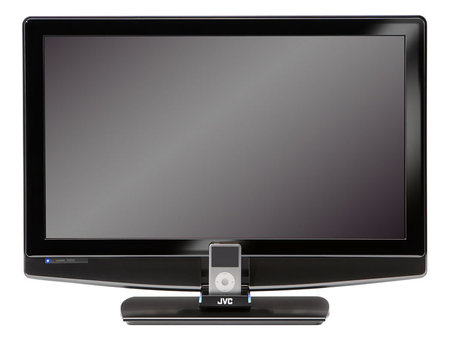 TV playback of iPod video content is more convenient than ever with the availability of new JVC LCD TVs with a built-in iPod dock. Each of the four new models, including three full HD 1080p sets, features JVC’s new TeleDock, a flip-down iPod dock at the base of the set, providing a direct connection for playback through the TV. The new JVC P-Series includes the 32-inch LT-32P679, 42-inch LT-42P789, 47-inch LT-47P789 and the 52-inch LT-52P789. The LT-32P679 is a 768p model, while the others offer 1080p resolution. In addition, the iPod will charge while docked whether the TV’s power is on or off.

Besides the iPod dock and playback features, JVC’s new P-Series LCD TVs are full featured high definition displays with a cabinet design that conveys the sets’ focus on both audio and video performance. Connections include three HDMI inputs, two component inputs, one S-video input, SPDIF input and an analog audio output for sending sound from an iPod or the TV through a home theater system. The 52-inch LT-52P789 JVC LCD TV will be available from August for approximately $3,200/.