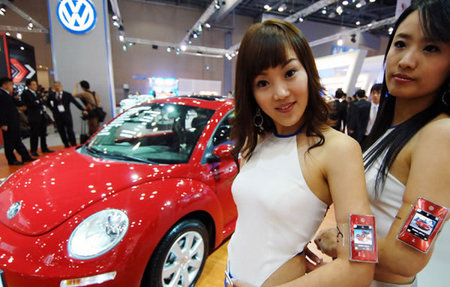 LG Electronics unveiled New Beetle music player that incorporates the trademark color, logo, and user interface of the German compact car, during the Seoul Motor Show event being held at KINTEX, northwest of Seoul. LG said it will launch various marketing campaigns for young consumers in close cooperation with Volkswagen Korea. LG hopes the Beetle player can raise the public recognition on its MP3 players as the Prada phone did with its mobile phones. The Beetle music player uses the same casing of LG’s existing lineup, but it borrowed the New Beetle’s trademark pastel colors such as Gecko Green, Salsa Red and Sunflower Yellow. The gadget also carries a Volkswagen emblem on the front and a New Beetle image on the back.

The Volkswagen New Beetle is a compact car introduced by Volkswagen in 1998, drawing heavily on the design cues of the original Beetle. Based on a Volkswagen Golf, the “retro” design proved to be more successful in some markets than in others. The big contrast between the New Beetle and the Classic Beetle is that, like most cars, the New Beetle has the engine in the front and storage in the back.LG said it will later announce the release date for the Beetle music player.