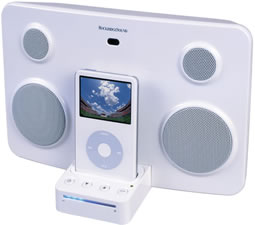 The RSJ-K1000 from Rockridge Sound Japan is a cradle type speaker system for iPod, iPod mini/photo and nano (after 3rd generation). The speaker system is available in two colors- white (IST-01W) and black (IST-01B).The built in amplifier has an output of 5W×2ch .The 7cm woofer ×2, 2cm tweeter – ×2 (anti magnetic) has playback frequency range 80Hz – 20kHz. With the remote control you can control the operation of iPod. Some functions of the remote control are limited to the iPod 5G. You can connect other portable playback devices than iPod via the built in mini stereo plug. The iPod is charged via the AC adaptor. However other MP3 players cannot be charged via the RSJ-K1000.