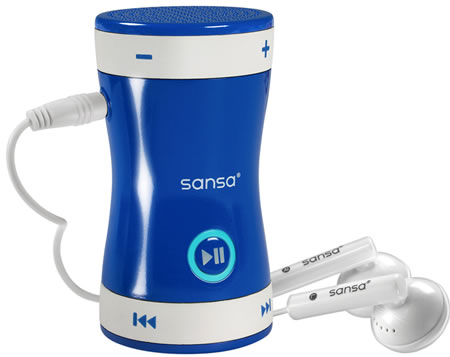 SanDisk Corporation today announced the new Sansa Shaker MP3 player designed for kids and families. The unique music player Sansa Shaker features many ways to enjoy and share songs, including two headphone jacks, a built-in speaker to listen without ear buds, and the ability to play SD cards loaded with your favorite music.Changing songs on the player is a snap – or rather, a shake. Young music lovers can impress their friends by shaking the device to jump to another song, or use a simple controller band for moving forward and back through their song library. A second band manipulates volume. The Sansa Shaker is available in pink and blue; it comes equipped with a USB cable, lanyard, five pre-loaded songs, and a colorful array of stickers so kids can customize their device. The Sansa Shaker is powered by an AAA battery that allows up to 15 hours of battery life when using a single pair of headphones.

Sansa Shaker MP3 player comes with a 512MB SD flash memory card which holds up to 125 MP3 songs. The standard SD card slot makes it easy to swap out flash memory cards loaded with a variety of music. The Shaker is expected to be available in the United States in late April at a manufacturer’s suggested retail price of $39.99, with availability planned in other parts of the world later this year.