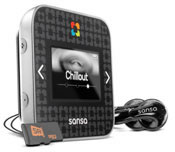 SanDisk today unveiled the new Sansa slotRadio player and companion line of slotRadio music cards designed especially for the casual music consumer. The Sansa slotRadio player is a small, stylish, portable music device that comes bundled with a slotRadio card preloaded with 1,000 songs handpicked from the Billboard charts, and professionally arranged into a variety of genre-themed playlists. The player comes bundled with a slotRadio mix card containing 1,000 songs. It features a variety of playlists from Billboard’s charts, including rock, contemporary, country, and others organized into themes such as “chillout,” “workout” and more. While songs cannot be removed from the card, users can easily navigate between the playlists, and skip through songs at the press of a button.

Priced at $99.99 including the 1,000 song card—the die-cast aluminum player also features a 1.5” OLED screen for viewing artist and song information, a FM radio and even an integrated, handy belt clip for hands-free listening. Additional 1,000 song, genre-specific and themed slotRadio cards will be sold separately at $39.99 MSRP.