Sanyo today announced the release of the eneloop mobile booster (KBC-L2BS) – a lithium-ion battery with USB power ports capable of supplying power to the latest gadgets, the iPad, iPhone as well as the XPERIA smartphone by Sony Ericsson in addition to other mobile phones. Through its built-in USB terminals, the eneloop mobile booster KBS-L2BS is capable of supplying power to mobile phones, smartphones, portable audio players, portable game consoles, and various other mobile devices. The eneloop mobile booster KBS-L2BS controls charging current to a device and offers output current of 1A, offering stable power to devices requires large charging current, such as the iPad and XPERIA. In addition, an associated micro USB attachment makes this product compatible with devices that take in power through a micro USB terminal, such as the XPERIA. 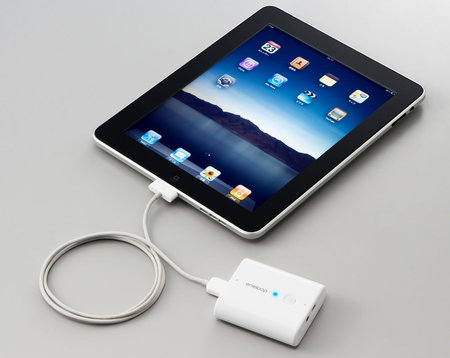 The eneloop mobile booster KBS-L2BS, equipped with two USB output terminals, is capable of simultaneously supplying power to two mobile devices when power output is 500mA. When using one USB output terminal only with output power being 500mA, power can be supplied for up to about 4 hours (about 2 hours when output power is 1A). When using two USB output terminals simultaneously, about 2 hours of power supply is possible from each terminal. The KBS-L2BS may be recharged through the associated AC adapter or a USB terminal of a PC using an included USB cable. The eneloop mobile booster (KBC-L2BS) is scheduled to go on sale globally after its release in Japan.