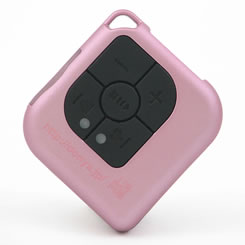 The new light pink colored MP3 player DN-2000 from Evergreen Corporation is for the woman on the move. The player comes with no built-in memory, instead requires you to purchase one SD memory card separately (up to 1GB support). The card serves as the player’s storage for MP3 music files. This basic MP3 player doesn’t have display or other frills found in expensive models. The slim, pocket-sized MP3 player runs for up to 5 hours on an AAA battery. Measuring 58×60×13mm (vertical x side x thickness), the player weighs 30g (without cell) and is available for 999 Yen approximately.

Coupled with the popular SD memory cards, the DN-2000 from Evergreen is the best choice for users who want unlimited storage capacity coupled with simplicity and flexibility.