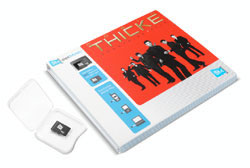 Grammy winning recording artist Robin Thicke, is utilizing the additional space on his card to add exclusive videos, behind the scenes footage and photos, personally chosen by Thicke to share with his fans.Within days of shipping, slotMusic cards will arrive on the shelves of Best Buy and Wal-Mart in the United States, with a manufacturer’s suggested retail price of $14.99.