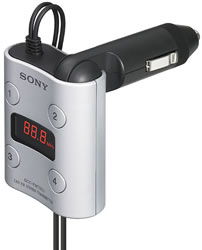 Listen to the music you want to hear on your portable audio device through the FM radio of your car stereo with the Sony DCC-FMT50U. This Sony Car FM Stereo Transmitter DCC-FMT50U is the perfect road companion offering full-range frequency selection from 88.1-107.9 MHz and four direct memory buttons for easy access to your most-used stations. This FM stereo transmitter also features a bright, digital display for easy viewing. Due to the flexible transmitting antenna with a magnetic end attachment, it is possible to transmit a stable FM radio wave in virtually any car. 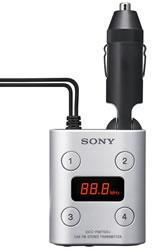