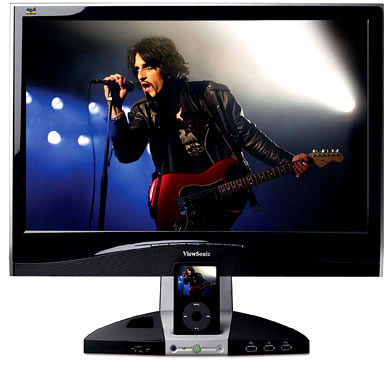 ViewSonic Corp., a worldwide leader in display technologies, today showcased the world’s first “Made for iPod ” desktop display technology with an integrated iPod dock at the 2006 Apple Expo in Paris . The ViewDock displays will literally modernize the desktop by enabling users to enhance their digital lifestyles through iPod viewing experiences that are more than 65 times larger than their iPod screens. The ViewDock Series expands media player possibilities by integrating an iPod docking station into an ultra-stylish widescreen display. Additional features such as multiple connectivity options—including several USB 2.0 ports and an 8-in-1 card reader—along with a microphone, integrated stereo speakers and a subwoofer, combine to make the feature-rich monitors the hippest, must-have displays.With the new consumer display line, ViewSonic not only offers millions of users a new dimension in expanded audio and video entertainment, but the opportunity to clean up and simplify their digital desktop as well.

The displays feature excellent front-of-screen performance, including ultra-fast response times, high brightness and contrast ratios, as well as wide viewing angles for getting the most out of fast action games, and downloaded video content and full-length movies. Availability of the ViewSonic ViewDock displays is expected later in the year at select resellers, retailers and etailers. Pricing is not yet available. The View Sonic View Dock concept offers a unique opportunity for everyone, from teens and young adults to business professionals, to get the most from their digital devices.
Via Viewsonic