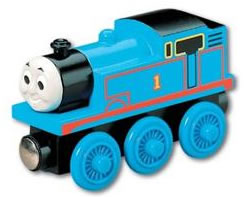 The U.S. Consumer Product Safety Commission in Washington Wednesday announced a voluntary recall of about 1.5 million Thomas and Friends wooden train toys distributed by the RC2 Corporation. Consumers should stop using recalled products immediately unless otherwise instructed, the commission said. The toys, all of which are manufactured in China, are recalled because they were colored with paint containing lead that could be toxic causing adverse health effects if ingested by children, the commission said. There have been no injuries reported, it added.

The recall covers Thomas products sold from January 2005 through June 2007 for $10-$70. Thomas and Friends is a character derived from a TV series aired in Britain in 1984. It is composed of a locomotive named Thomas and a variety of trains. The products are sold as a hit at Thomas theme parks and department stores throughout the world.