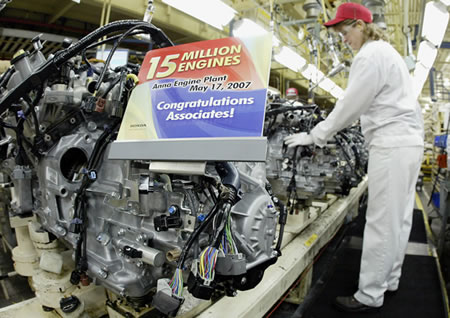 Associates at the largest Honda auto engine plant in the world celebrated the 15 millionth engine produced since Honda of America Mfg., Inc. opened the Anna Engine Plant in 1985. The 15 millionth engine, produced on Line 2, is a 6-cylinder motor designed for a Honda Accord Coupe* to be assembled 45 miles to the east at the Marysville Auto Plant. The Anna Engine Plant has three assembly lines and two foundries, one for aluminum and one for ferrous casting. The plant produces drive shafts, connecting rods, brake components and other parts, as well as all of its own engine blocks and heads. The Anna facility will serve as the engine supply source for the Honda Manufacturing of Indiana plant under construction in Greensburg, Ind. Production at this new plant begins in fall 2008. Engines from Anna power the Honda Accord Sedan and Coupe, Civic Sedan, Element and CR-V, and the Acura TL and RDX made in Ohio – as well as the Honda Civic Sedan, Coupe and Si, the Ridgeline and the Acura MDX and CSX models built at two Honda plants in Alliston, Ontario.

The Marysville Auto Plant will have a celebration of its own later this year. It was the site 25 years ago of the first Japanese car built in America – a Honda Accord. The anniversary coincides with the production of an all-new Accord for the ’08 model year. The Anna Engine plant reached its milestone 22 years after it opened. At its current production rate – 1.15 million engines annually – it will take only 13 years for Anna to build another 15 million engines.