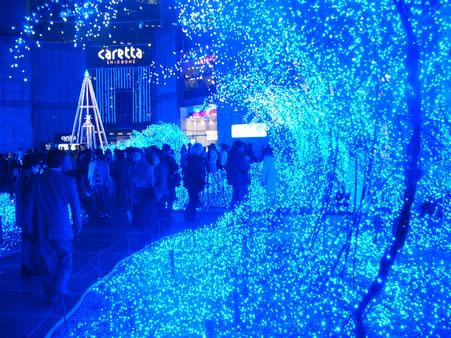 A total of 200,000 blue and white light-emitting diodes (LEDs) form waves in a 860-square-meter plaza at Caretta Shiodome. Caretta Shiodome is the first of several skyscrapers to open in the newly developed area between Ginza, Shimbashi and Hamamatsucho in Tokyo.Caretta Shiodome opened in December in 2002, and is a skyscraper of 51 floors, most of which are occupied by the offices of Dentsu, Japan’s leading advertising company.

The other floors accommodate a musical theater, a museum on advertising and a range of shops, cafes and restaurants, including the “sky restaurants” on the building’s top floors.