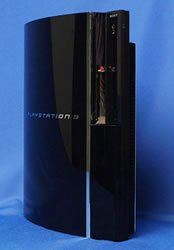 Thousands of game fans queued for hours, braving Tokyo’s early morning chill and occasional showers, as Sony’s much-heralded and delayed PlayStation 3 game console went on sale on Saturday. Only 100,000 PS3s were shipped by Sony for Saturday’s launch in Japan due to production problems with the DVD player, so many thousands of would-be buyers went away empty handed. After its sell-out launch, the Sony PlayStation 3 buying frenzy has jetted into cyberspace with some owners asking up to four times the retail price on Japanese Internet auction sites. One PS3 with a 60-gigabyte hard drive costing about 500 dollars in Japanese stores was on sale Monday on eBay for an asking price of 2,300 dollars.

Others were attracting bids from 600 dollars up to as high as 1,475 dollars. Sony PS3s have also been fetching as much as three times the retail price online in the United States ahead of their launch there on Friday as people sell their pre-ordered consoles in advance.The PS3 is the latest entrant to the near $30 billion video game industry and will be fighting Microsoft’s Xbox 360, on sale for the past year, and Nintendo’s Wii, which will be in U.S. stores next week, for market share.