After months of being told to strip off to keep cool for summer, Japanese workers on Tuesday were urged to wrap up for winter in an energy-saving Warm Biz campaign. Japan’s hot summer months were marked by a heightened Cool Biz campaign—aimed at limiting air conditioner use and encouraging workers to ditch jackets and ties. As Japan continues to face possible electricity shortfalls in the wake of the Fukushima nuclear disaster that has left dozens of atomic reactors offline, the government is asking people to keep warm the old-fashioned way.

Using a cartoon ninja character, the environment ministry suggests putting on scarves, gloves and leg warmers during the day and an extra layer after the evening bath, or wearing a towel around the neck in bed. For dinner, it recommends a traditional Japanese hotpot.Eating root vegetables and ginger will help to warm the body up, it says, adding that getting off the train a stop earlier and walking the rest of the way to work will boost circulation. 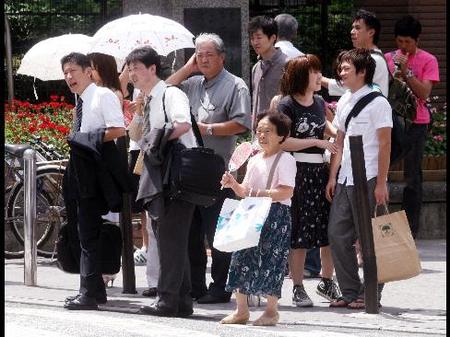 Officials are telling homes and offices to set heaters and air conditioners no higher than 20 degrees C. Companies have also got in on the act, with adverts on the Tokyo subway extolling the energy-saving virtues of home appliances and reminding commuters to keep the dial turned down. More off-the-wall ideas include a suggestion from brewer Kirin that beer drinkers microwave their stout-style brew and add sugar or spices. Japanese have long been used to a plentiful and reliable electricity supply that powers everything from garish neon signs to heated toilet seats.