Kohjiro Hara and Nagatoshi Koumura, Research Scientists at National Institute of Advanced Industrial Science and Technology, Japan have developed a high-performance dye-sensitized solar cell (DSSC) based on organic dye. Ruthenium complexes contained in conventional DSSCs are not used in the new solar cell, thus meeting the requirement for conserving this rare metal. In addition, the use of ionic liquid (IL)-based electrolyte in the cell has led to a good long-term stability of more than 2000 hours under AM 1.5 G irradiation (100 mW cm-2), compared with that less than 100 hours in DSSCs with volatile organic solvent based electrolytes. The newly developed high-performance dye-sensitized solar cell (a type of IL-based electrolyte) achieved a high solar-to-electricity conversion efficiency (cell efficiency) of 7.6% under AM 1.5 G irradiation, which is one of the highest performance among DSSCs with IL based electrolytes, and 5.5% efficiency with ionic gel-based electrolyte. 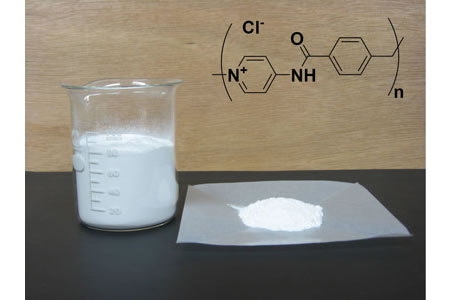 This technology may provide a solution to both the high manufacturing cost of the currently predominant silicon solar cell and the unstable supply of high-purity silicon. It is expected that the cell will be commercialized as an innovative solar generation technology.